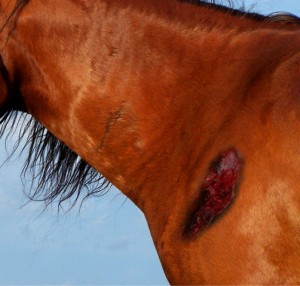 Any wound or incision on a horse, if not kept clean and dry, can become infected by opportunistic bacteria.  Clostridium tetani is a spore-forming bacterium common in soil and manure that is responsible for the very painful and potentially fatal disease Tetanus.  C. tetani is a real concern in deep puncture wounds due to being anaerobic bacteria which thrive in environments lacking oxygen; but, it may also infect castration procedures, retained placentas, unhealed umbilical stumps in foals, or any break in the skin.  C. tetani produce a toxin called tetanospasmin that blocks specific nerve transmitters which normally allow muscles to relax after constriction.  The result is rigid paralysis of affected muscle groups in the limbs, neck, face, and tail.  Eventually, the toxin causes respiratory paralysis, and death results when starvation, dehydration, or suffocation occurs.

Clostridium tetani cannot grow and reproduce in the presence of oxygen.  When the bacterium is exposed to air, it forms protective spores in which to lie dormant.  These spores are resistant to heat, desiccation, UV radiation, and common household detergents and disinfectants.  They can remain viable in soil for years.  C. tetani is then reactivated when conditions are again favorable for growth.  Neurotoxins are created inside the active bacteria and released when the life cycle is complete.

Tetanospasmin is one of the most toxic substances known to man in terms of the minimum amount required to cause death.  It ranks third in potency after botulinum and diphtheria toxin.  Horses are one of the most sensitive domestic animals to the effects of tetanospasmin, with a minimum lethal dose of about 0.1 to 0.3 nanograms per kilogram of body weight.  (One nanogram equals one billionth of one gram – one gram is about three hundredths of one ounce)

Tetanus, the disease, is not contagious to other horses, animals, or people.  It requires an established C. tetani infection that facilitates tetanospasmin delivery into the surrounding tissues.  Rarely, tetanus can be acquired after ingesting the toxin released from bacteria in contaminated feeds.  The toxin is carried from tissue to the spinal cord by a process called axonal transport.  There it binds permanently to receptors used for skeletal muscle control, specifically blocking muscle relaxation.  There is no known reversal agent that can remove bound tetanospasmin from the receptors.  It may take days to weeks for symptoms to develop while enough toxin makes its way to the receptors at the spinal cord; tetanospasmin has no local effect on tissues immediately surrounding the infection.

The symptoms of Tetanus can vary depending upon the size of the infection and the size of the horse.  Foals are very susceptible due to their smaller size as well as the immaturity of their immune systems.  Lameness or an altered gait may be the first thing an owner notices, followed by spasms – an overreaction to sounds, touch, and visual stimuli.  A “saw-horse” stance is commonly described as the disease progresses; the limbs and neck will be fully and painfully extended.  The colloquial name for Tetanus is “lock-jaw”, which describes the clenched jaw and pulled back facial muscles that is also common.  The horse will have trouble eating and drinking, and may eventually be unable to stand at all.

Respiratory paralysis is usually the final stage of the disease, if the horse does not succumb to dehydration or starvation first.

A diagnosis is made based upon clinical symptoms, the presence of a wound, and unvaccinated status.  There is no test for Tetanus other than a culture that will confirm the presence of C. tetani.  Even an apparently healed wound can harbor the anaerobic bacteria, however.

Successful treatment for Tetanus relies on quick recognition of the disease and aggressive therapy.  There are three objectives that must be met in the effort to save the horse:  First, the source of the infection, and thus the toxin, must be determined and disinfected.  Wound lavage (hydrotherapy) and debridement (removal of devitalized tissue) is necessary to physically reduce the numbers of bacteria.  Former wounds may be reopened surgically and explored for signs of bacterial infection.  The infected wounds will be left open to heal by second intention; suturing would only secure anaerobic reservoirs of infection.  Injectable antibiotics like penicillin and tetracycline are then given to kill bacteria deep within tissues.

Second, any unbound toxin remaining in the animal must be captured and eliminated using Tetanus antitoxin injections.  It has already been said that there is no way to reverse the already bound tetanospasmin, so it is vital to protect healthy neuro-receptors if the horse is to be rehabilitated.  New motoneural connections can be made over time while the animal recovers.  Unfortunately, the Tetanus antitoxin can cause liver disease over time, so risk should be discussed with your veterinarian.

Third, symptomatic treatment is used to control spasms and muscle paralysis.  Also, dehydration and anorexia is combated with fluids and electrolyte solutions given intravenously.  Feeding through a nasogastric tube may be necessary if the horse cannot eat for an extended duration.  Tranquilizers, muscle relaxants, and anti-inflammatory drugs are given to improve symptoms of pain, spasm, and paralysis.  In some cases, the horse may be catheterized and rectally palpated to remove urine and fecal material that has been retained.  At the point when respiratory support is required, the prognosis is grave and humane euthanasia may be elected over prolonged suffering.

In any case, the prognosis for an animal with Tetanus is guarded at best.  The fatality rate is 50 to 70% despite treatment.  It is always better to institute prevention methods for this devastating disease.  Tetanus toxoid vaccination is safe and effective and is considered a core vaccine for all horses regardless of location and purpose.  Please see Vaccination Recommendations for Horses for recommended vaccination protocols.